So here we are trying to bring the Little People up to be good law abiding, cultured citizens and look what they're getting up to behind our backs. We wandered the streets searching for them everywhere and finally found them in a bar being led astray by bad people drinking beer. 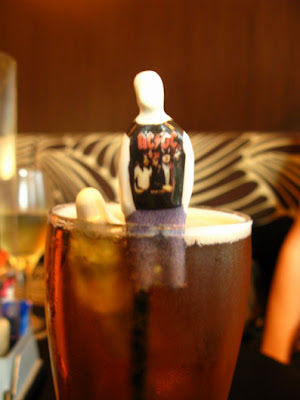 In a desperate attempt to save them (particularly HER!) I had to down that beer immediately to get them out of there! They were exhausted from trying to tread water in that glass for all that time (particularly hard when you have a straw or two stuck up your leg I imagine). 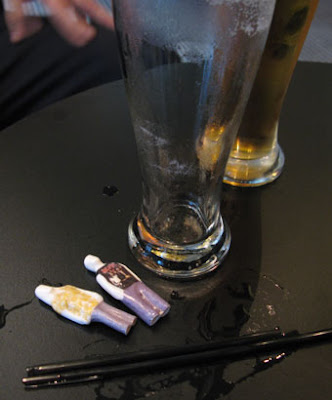 And then for some reason as we were heading home on the train I had such trouble focussing the camera…..weird. 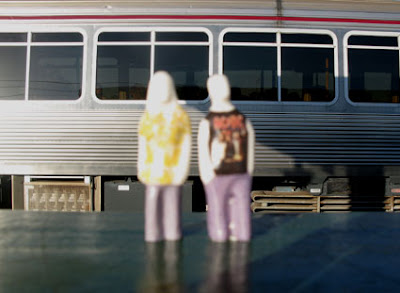 Anyway, we’re a little worried about the people they’ve been hanging out with lately so we’ve decided to send them away to get a bit of culcha. Kenji and I were really looking forward to going to the Venice Biennale this year but have selflessly given our tickets away to them in the hope that it will straighten them out and help them develop a deeper appreciation of some of the finer things in life. They’re going to be chaperoned by one of the most sophistimicated brisvegas ladies we know too, so there’ll be no more shenanigans in the pub for these two.

Look out Venice…..here they come!
Posted by Mel Robson at 1:31 am

pity they can't come to Margaret River with me this weekend! can you imagine them at all the wineries? better that they don't, they might lead me astray...

Lia, you are a bad woman.
Miss Dot, you're much more sensible.